2020 has been a challenging time for everyone and as we look forward to some time off this Christmas, there’s one man that’s going to make sure that he brings festive cheer to households this week.

Santa Claus has been working hard behind the scenes to make sure nearly 2bn children across the globe receive their Christmas presents on time and the pandemic isn’t going to stop him, or his merry elves.

Like many businesses who have had to adapt in recent years, Santa too has had to look at how he can streamline his North Pole operations so both Santa and his helpers can concentrate on doing their job effectively.

Intrigued by the world of digital, especially as he’s running a data-heavy enterprise, Santa has decided to implement a combination of AI, robotics process automations (RPA) and machine learning to run his business of making and delivering toys.

So how has Santa done this?

Santa was keen on using a firm that has extensive experience in this field. He knew Manchester is a city with massive digital ambitions so decided to look closer when he came across Agile Automations.

He was immediately impressed with the team who understood big data and knew the tools needed to drive maximum efficiencies into the business. When Covid hit Santa decided it was time to develop a digital strategy incorporating all aspects of RPA. He understood that implementing robotics into a system solves defined tasks by learning from data.

Data management in 2020 and beyond

Santa receives hundreds and thousands of letters a day from eager boys and girls.

Santa’s elves would normally read the letters and file them away – but the filing cabinets are now at capacity and sometimes getting to the right information can be time-consuming – there have even been incidents when a letter has gone missing.

With a new digital system, Santa has incorporated OCR (Optical Character Recognition) tech. Thus, the scanned the letters are digitised and entered into a CRM system which takes note of the name and address, updated where required from last year, or indeed creates new entries; as well as including a list of toys.

It can also recognise if the letter should go into the naughty or nice list based on scoring and Santa’s oversight. By compiling a list of activities which are good, and a list of activities which are bad, coupled with a weighted scoring system, Santa can then identify which list a letter should go in. Unfortunately, several members of our team are still on the naughty list! 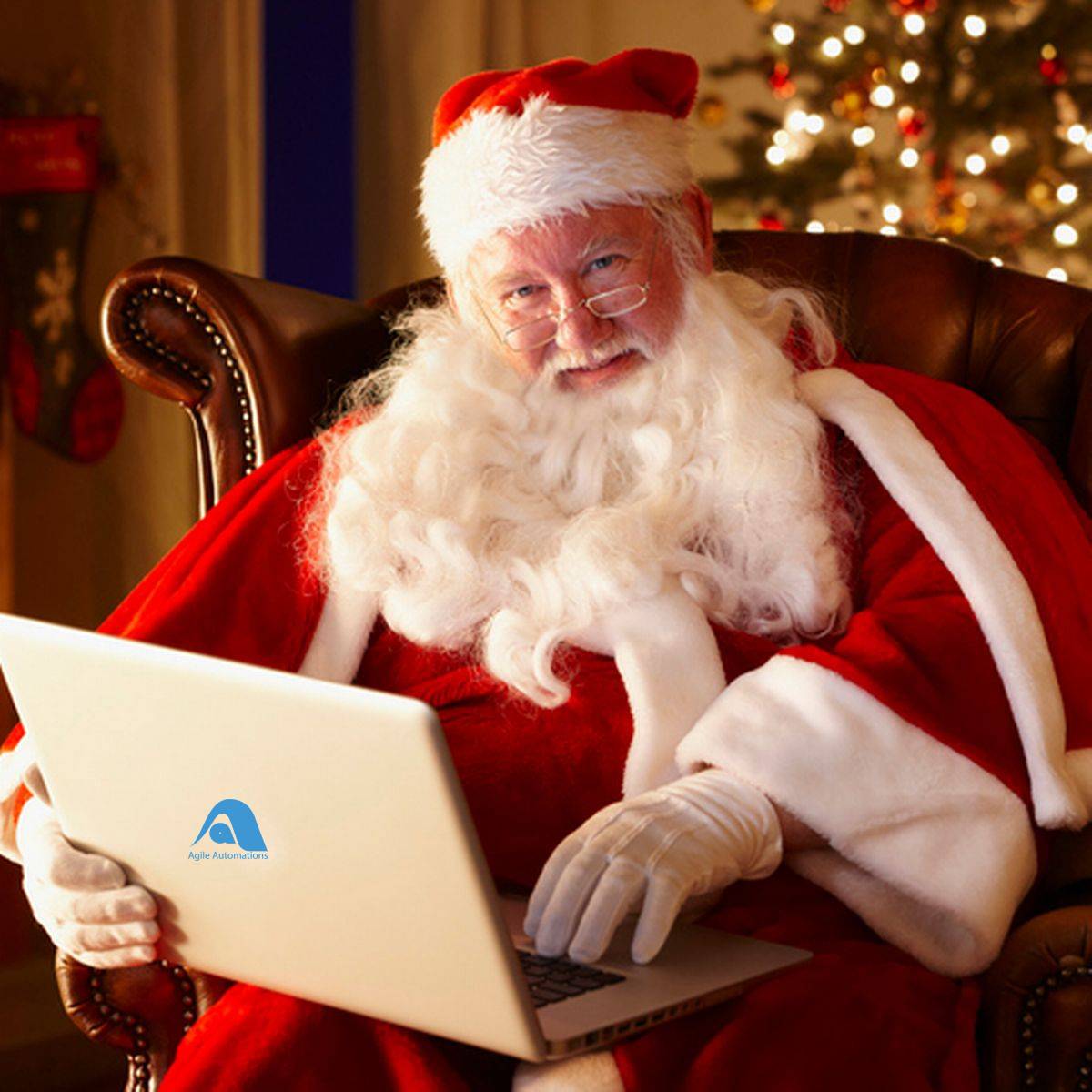 Staffing issues during the pandemic

By getting bots to do the repetitive and time-consuming tasks, Santa has a much happier workforce as they’re not up all night trying to sort through the letters, update records and keep on top of the naughty and nice list; not to mention the toys requests.

But this year has been an unusual one for everyone including Santa as he has also had to deal with staffing issues as hundreds of elves have been impacted by Covid.

Thanks to automation in Santa’s workflow, he has been able to keep track of elves who were off due to Covid or those who have been told by Track and Trace to isolate. Some staff had to be furloughed too – even Santa wasn’t immune to the economic uncertainties caused by the pandemic, but he did realise that there was something that he could do about it.

With almost 1m elves working at any one time, the new robotic workforce could be easily scaled up or down to cope with fluctuations in capacity, ensuring that resource was readily available when required.

The system could also see where there was excess capacity. It allowed data from the CRM to show that ‘Elvis’, who is normally busy making board games, could be reassigned to make computer games, as the letters showed that demand had reduced in one and yet surged in the latter.

Once Santa’s workflow automation and CRM were running smoothly, he’s had to look at implementing API into Amazon for deliveries and tracking to help on a special night, and take the pressure off Santa. Through outsourcing to a trusted partner to access their resources and expertise, the system could look at which presents might be best fulfilled by Amazon and which by Santa to increase efficiency.

With so many toys to make with materials and supplies coming from all over the world, it was not enough to keep a note on a spreadsheet, which was clunky and continually crashing.

Santa’s suppliers need to be paid on time and therefore a bank reconciliation robot was introduced which cross-referenced invoice orders and payments. Automating the payment runs at key trigger points when both invoices become due or indeed when the system automatically generates purchase orders which are based on the production requirements of Elvis and other partners.

Navigating the globe and keeping track of operations

Santa also wanted a system that could help him travel from country to country without relying on Rudolph’s sense of navigation.

Santa told us Rudolph is good, but it can be a long night delivering toys to fast asleep boys and girls and last year he took a wrong turn, delaying Santa by 45 mins! This is a long time when you must also head back to the North Pole to join Mrs Santa Clause for Christmas breakfast.

But rest assured, there will be no mistakes this year thanks to an automated mapping system which is cross-referenced with an external address data and Google maps.  This means shorter and faster routes, which also means everyone can head back to the North Pole in plenty of time without the usual rush and stress.

With all the technology implemented, Santa has a new app to monitor performance on the go. Elves also have access to the app which logs each address visited, time taken to deliver presents in each continent as well as reporting ongoing issues. A dedicated IT team back in the North Pole head office can pick up on any problems immediately.

What did Santa say?

Said Santa: “When you work all year long for that one special night, there can be no space for making mistakes.

“I was reluctant to go down the RPA route, but the elves have been complaining that I need to move with the times. They work hard all year round often working into the nights and weekends.

“By implementing the latest technology has meant we have saved time and it has allowed us to concentrate on other parts of the business such as making new toys and our marketing and social media strategy.

“Now that the elves have more time, they are a much happier and more productive workforce.

“Thanks to Agile my enterprise is significantly efficient, and the digital transformation of the organisation means we can now expand our reach to more children around the world.”